Occasionally I will round-up some demos, either ones recommended to me or things that catch my interest. As a designer it is a nice way to sample many new games and see new ideas in action. I would recommend anyone even thinking about getting into the industry to take the time and sample many demos periodically. I figured I’d go ahead and share my findings for the 3DS demos I recently collected and tried. There are some interesting ones, and a real curve ball. So, let’s start off with a really good one and work things out from there…

Right off the bat, this game invokes the retro spirit. While many retro references can be inferred with this title, I felt that the creators were likely inspired primarily by the Commander Keen series (look it up) but took everything to the next level. 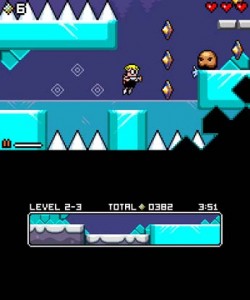 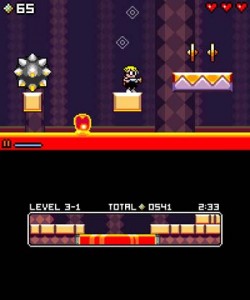 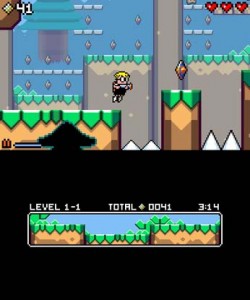 One of the neat things they did here was recycle the Virtual Boy’s layered platforming idea. This makes a lot of sense given that this platform, the 3DS, is the ‘success’ that the Virtual Boy had wanted but never did achieve. This gives a whole new dimension to the game, so to speak. You can jump between ‘layers’ of platforming, into the background, or into the foreground.

My hat is off to the level designers for keeping visibility a key factor in their level design. Everything in the demo is clear and readable. Nothing gets in the way, and they are very aware of the other layers and how they affect the level design even when they’re the back or foreground to whatever layer the player is currently active in.

I would highly recommend this demo, if not buying the whole game. In fact, I will definitely be purchasing it myself!

By: SEGA of America

This one I had higher hopes for, but the execution seemed to be off. I had some trouble getting the game to recognize the motions in time. It felt as though the response time was off. Maybe it was just me. I stopped playing quickly.

I do like the premise of the story though, as it reminds me a bit of Lupin the Third. I am a huge Lupin the Third fan. In fact, the idea of having many micro game like sequences through a heist, was one of the ideas I had when thinking of how to adapt Lupin the Third into a game without losing the franchise’s feel.

Unfortunately, as much as I’d like to, I can’t say I’d play this again. It’s a shame since I really like the story premise behind it all.

Epic Mickey on the 3DS was a mixed bag for me. I liked the platforming, and the homage to the old Sega title, but I felt there was too much interruption of gameplay flow forcing you to use the 3DS features. 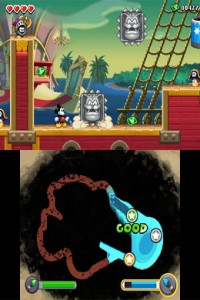 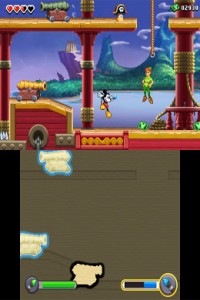 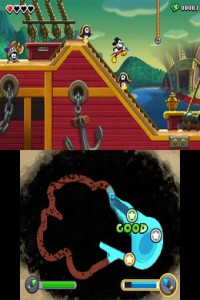 Seen above, you have a bunch of different touch screen abilities to manipulate the environment. There are things such as “trace and fill this shape” or “erase this shape”. For me, it was too much busy work, and interrupted the flow of the game. I would have preferred just a touch screen button that did the command, instead of having to whip out the stylus every 10 seconds to draw a picture, erase a picture, or whatever.

The platforming and level design seemed really solid though. They had nailed that aspect of the game perfectly. If the game was just that, I would have purchased it immediately no questions asked.

Another gripe was that the long cutscene at the start of the demo was not skippable. It was so long and boring that I admittedly started doing other things, such as checking email, browsing sites, and so on.

Fractured soul definitely was inspired by Mighty Switch Force. The basic idea of the gameplay is the same, and it does make for some interesting imagery, though overall I felt there was one problem with the design that separates it as a second rate copy, than an evolution of the split dimension gameplay. 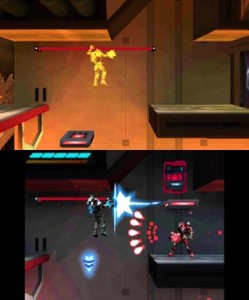 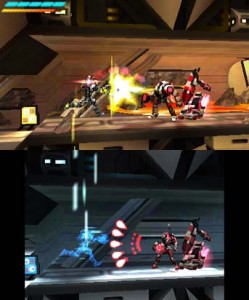 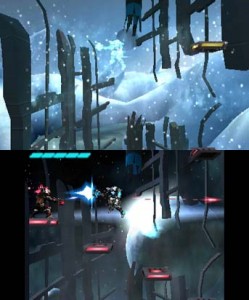 The gameplay, as you may notice in the above screen shots, is there are two planes of existence, each represented by a screen. They have the same physical layout for the room, but the objects in the room, be them enemies, platforms, or other interactive objects, are different on each one. Platforms on one may not be on the other and vice versa.

Your goal is to clear the stage, and to do this you need to phase back and forth into the different screens. Simple enough, and as I said before, very Mighty Switch Force inspired.

However I think the thing falls flat in the fact that there are two screens being switched to. It creates a great opportunity for neat effects like you see in the first screen shot, with the arctic background versus the space background, but it becomes hard to follow. It is difficult to focus on both screens at once, let alone compare them, see if it is safe to switch. Then you have to worry about dodging enemies, being attacked, and ending up in a hazard all at once. It is a bit too much to keep track of.

I do have to give points for originality, and your mileage may vary. I’d definitely say try the demo, as it has some interesting stuff going on. However if you want a great example of this gameplay style, Mighty Switch Force is the one I’d recommend hands down to buy.

Seriously, go buy Mighty Switch Force. It’s great, and so is the developer behind it, WayForward.

This game looked interesting, as it is a primarily top down brawler, at least the demo was. I’m a fan of brawler games, so I figured I would try it out. The results were a mixed bag. 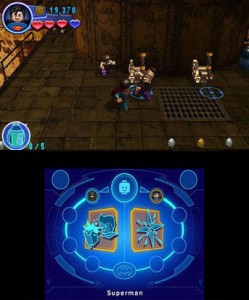 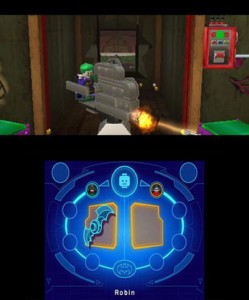 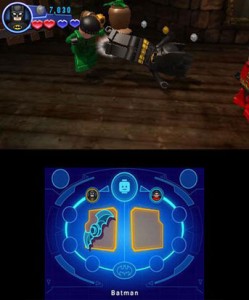 While the visuals were pretty good, the combat flow was a bit slow, and awkward in some cases. The main attacks lacked good flow, and seemed sluggish. The ability to swap characters on the fly was nice though. Probably my greatest gripe was the use of secondary weapons. Take the batarang for example. In order to use it, you need to use the touch screen to aim it on the top screen. It’s too unwieldy and slow during combat to bother with for the most part. There was no time stop, or slow, associated with the use of it so you could get blindsided while trying to aim the thing.

Your mileage may vary. Perhaps it picks up later. It seems standard fare as far as licensed games go.

And here’s the curve ball…

I liked this demo. It is well designed, well executed, and goes far above and beyond the typical genre expectations for this type of title. This is an excellent game, and a shining example of a great demo.

Yup, I know. Here is my “Man Card”. You may confiscate it. I hold no shame.

As you may expect by the title, and below screen shots, this is a fashion game designed around making, buying, and selling outfits. You may also customize your ‘room’ with purchased furniture replacements, and so forth.

The demo gameplay can be split into two phases, generally. Offline you can customize your outfits, room, and so forth. Online you can shop for outfits. Now here’s the real twist, online mode allows you to actually build your own custom store. Going above and beyond all expectations, this game actually goes out on a limb and makes an entire online marketplace for you to buy and sell outfits.

The graphics are very well done, especially considering there are hundreds of clothing options for the character, and they all fit without glitches that I’ve seen. You can layer up to three shirts if I recall correctly, and yet, I couldn’t get the graphics to break on any combination, though admittedly some combinations just look strange. On top of this, you have the choice to color change a ton of things, mostly for the room you can decorate. This is a much welcome feature, and I know it’s not really an easy thing to implement in a high quality way on a wide scale, especially with 3D graphics.

I will say that one of the cooler features of this game was the ability to take photos of your character, and then export them to the SDcard. Shall I share a few of the ones I took of the outfit and room I made for my character?

I think one of the major draws of this title for me was the act of character creation. I like designing characters of course so I had a lot of fun in creating outfits.

I was really surprised at this game. At any first glance, I would have shoved it into the “no way” category. These developers know what they’re doing, and seeing as how Nintendo themselves had a hand in it, that lends credibility to my assessment of the game’s quality. It just simply is a great game as far as I can tell.

Honestly, if it wasn’t for Mutant Mudds, I would have put this game at the top of my list for this batch of demo reviews. If you are looking for a game for you, or your child, that is both creatively satisfying, and teaches money management, then this is a highly recommended title.

So that ends this demo round-up. I download and try demos periodically as I have spare time to check out new games. I also had fun writing up this entry. I wouldn’t mind doing another one sometime. Hopefully you found it enjoyable, or entertaining, or both.